Happy Thanksgiving!  Most vendors will be closed Thursday and Friday.   Orders entered on Thanksgiving will be processed Monday, Nov. 30th 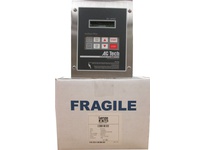 Since they can be dependable and cost-effective, VFD's have become the favored method to reach variable rate process.

Air Gap: The space between the stationary and rotating parts of an electric motor.

Surrounding: The atmosphere encircling a motor.

Ampere: A measure of the speed of electron flow (current). It's frequently abbreviated as Amp.

Dysfunction Torque: The maximum torque a motor can grow without experiencing or stalling an abrupt drop in speed.

Brush: The substance in connection with an armature or slip ring assembly providing you with the electric connection between rotating and stationary components of a motor.

Commutator: An assembly mounted on the rotating shaft of a DC motor providing you with the changed connections between armature coils and the power supply.

Conductor: Stuff that provide small resistance to the stream of electricity..

Duty Cycle: The connection between the idle time of an electric motor and the operating time.

Eddy Current: Heating and reductions in metals caused by localized currents due to an alternating magnetic flux.

Efficiency: The ratio of mechanical output signal of a motor to the electric input signal power.

Produced or caused voltages in a electric circuit.