Significant weather events across the U.S. are impacting our supplier's network. Some orders may be delayed for a few days.

Things break. No matter how you handle them, chances are that they will fail at some point. The same holds when it comes to bearing. However, understanding the main problems that affect bearings can help you to prevent the damage, reduce wear and tear, enhance performance, and extend their lifespan.

Note that when you identify the problem, the most important thing is acting with speed to address it immediately. Here are three common bearing problems.

As the bearing run progressively at high speed, the problem of overheating can easily occur especially with poor cooling. The main symptoms of overheating include discoloration of the balls, cages, and rings from gold to blue.

Temperatures in excess of 400°F can easily anneal the ball and ring materials. The effect is loss of bearing hardness and ultimately reducing its capacity to run optimally. In extreme cases, the balls and the rings will get deformed. The high temperature could also damage or degrade the lubricant. 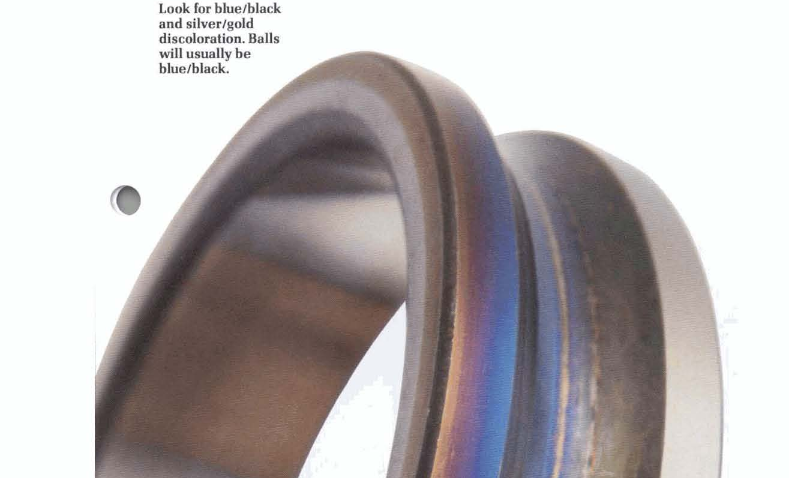 The common cause of high temperatures could be high electrical heat load, insufficient cooling, or poorly designed heat paths. The problem can be addressed by installing supplemental cooling and thermal overload controls.

Fatigue failure, commonly called spalling, means a fracture of the bearing’s running surfaces and subsequent removal of small particles. The fracture can take place on the outer ring, inner ring, or balls.

Spalling is progressive and will easily proceed from further operations. In many cases, the problem is caused by elevated levels of vibration which signifies abnormality. 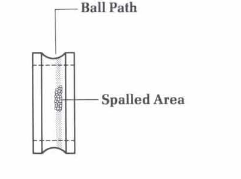 The best remedy for the problem is replacing the bearing. You could also consider redesigning the system to change to bearings that have a higher fatigue life.

The design of angular contact bearings is aimed at ensuring the axial load is accepted in one direction. Now, if loaded in the opposite direction, there is a risk of truncation of the outer ring by the outer ring’s low shoulder. The effect of this is excessive stress, high temperatures, and ultimate failure.

The failure in this case closely resembles that caused by heavy interference / tight fit. The balls have a grooved wear band resulting from the ride on the outer raceway edge. 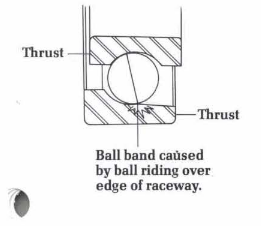 The best corrective action is installing the contact bearing correctly. The angular contact bearings should be carefully installed to ensure that the resultant thrust is on the wide face (the side marked thrust).