Dear MRO customers, as many of our vendors will be closed on Friday due to Independence Day, some orders may not be processed until Monday 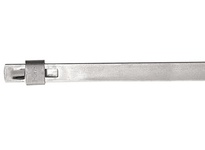 View additional description
Order minimum ($) may be applied. Add desired QTY to cart and proceed to checkout to view minimum Hose clip or a hose clamp is seal and a device used to attach a hose onto a fitting such as nipple or a barb. Many sorts can be found, including :

Screw clamps include a galvanized or stainless steel band into which a screw thread design pressed or was cut. One end of the band features a captive screw. The clamp is set around tube or the hose to be linked, with the loose end being fed into a narrow space between the captive screw and the group. Screw clamps are typically used for hoses 1/2 upwards, with other clamps used for smaller . that were hoses

As an easy means for the transmission of small quantities of electricity they are able to additionally be used in the same way. A short amount of hose is cut between two shafts where variations or shaking in alignment may be taken up by the flexibility of the hose. This technique is well adapted to use for mockups in a development lab.

Spring clamps are especially suited for enclosed or otherwise inconvenient areas where other clip kinds would need tightening tools used from potentially inaccessible and narrow angles. It has made them especially popular for uses like automotive engine bays and for fixing barb connections in PC water cooling.

Wire clamps include a piece of heavy wire, usually first bent into a tight U, steel, subsequently formed into a ring shape with one end and ultimately the ends bent outwards and cut. A prisoner nut is attached to one end, and a captive screw to another.

Restocking, shipping and handling fees may apply to any return with this manufacturer.