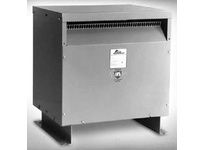 This waveform distortion effects of transformers and motors, improved neutral currents and malfuntion/damage to other equipment. Acme Electric introduces a line of Harmonic Mitigating Transformers that join the technologies revealed in our nonlinear load (K Factor) transformers. Where conventional K-Variable transformers "deal" with harmonics, holding them within the transformer and preventing them from going farther upstream; Harmonic Mitigating Transformers remove harmonics by comparing them against themselves. This technology not only results in "cleaner electricity" but also supplies the most energy efficient means to handle harmonic issues.

20% Restocking, shipping and handling fees may apply to any return with this manufacturer.