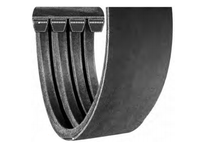 Products from another supplier. Note, it may not be identical in style or function to original item
+ ADD TO WISHLIST

This is the banded version of the Power-Wedge Cog-Belt. The controlled grip of raw edge sidewalls and superior flexing are combined with the qualities of a banded belt. Designed to minimize belt whip and turnover on the drive, the Power-Wedge Cog-Band provides outstanding resistance to oil, heat and harsh environments. It’s an ideal choice for applications where increased horsepower or speed is required or when unusually severe shock loads are encountered. The reinforced band across the top of two or more individual v-belts greatly enhances stability by preventing the belt from turning over or jumping off the drive.