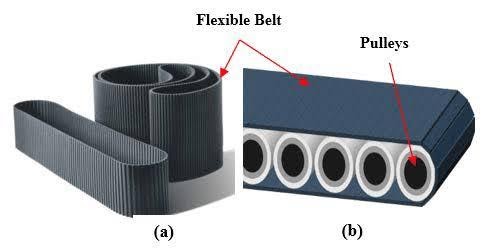 A conveyor belt pulley is a simple mechanical device installed in belt conveyor systems to:

Conveyor belt pulleys play an important role in bulk material handling operations. The type of pulleys used and their configuration can have a huge impact on the efficiency and reliability of any conveyor system. That's why pulley selection is such a critical process. The right pulley can ensure that your equipment remains up and running. Choosing the wrong one can cause your converor system to break down, resulting in costly downtime.

In general, a belt conveyor system will always have a flexible belt and at least two pulleys - the head or drive pulley and the tail or return pulley. Additional conveyor pulleys may be installed depending on the application.

A type of conveyor belt pulley that is installed at the discharge point of the conveyor, usually mounted in external type bearings. The head pulley turns and moves the belt, powered by a motor and reducer. The face of this type of pulley is typically flat or crowned. Many head pulleys are lagged for better traction and to reduce slipping.

This is any type of pulley that is not used in a drive position. Instead, it is left to rotate freely, driven by the belt, in order to support the system. Idler pulleys can be further divided into several subcategories:

A type of conveyor pulley that is installed at the loading end of the conveyor. It is used to redirect the conveyor belt back to the drive pulley. Similar to the head pulley, this can be mounted in external bearings. It can also have internal bearings. On short conveyors, the tail pulley often serves as the takeup pulley, providing tension on the belt.

This type of conveyor belt pulley is located close to the drive pulley. It makes the belt "hug" the drive pulley more, increasing the area of contact between the belt and pulley in order to improve belt traction. 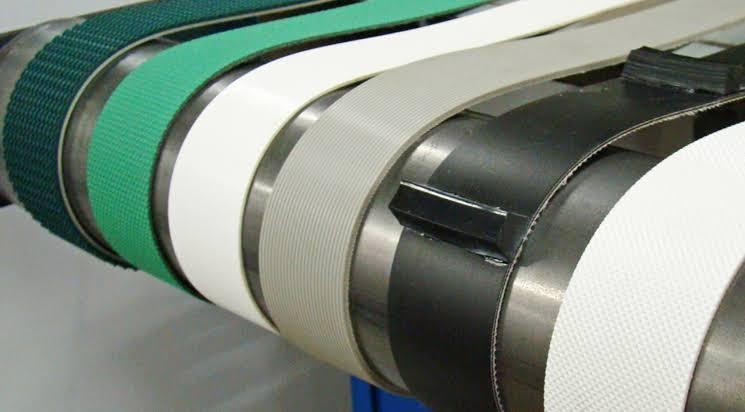 A type of conveyor pulley that is used to change the running direction of the belt. It is also used to provide tension where bends occur in the system. Bend pulleys got their name from the fact that the belt bends over the pulley in order to create a loop where a take-up pulley can be installed.

A weighted conveyor pulley that is used to take slack out of the belt and maintain necessary belt tension. It is typically used on conveyor belts of longer lengths. Its position can be adjusted, depending on changes in the length of the conveyor belt